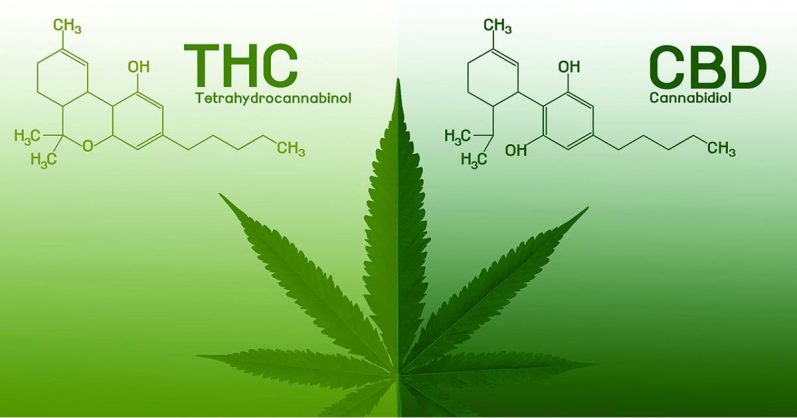 Cannabis originates from the plant Cannabis Sativa. It comprises both hemp and cannabis. The plant cannabis consists of many cannabidiol compounds, and among them, the most common ones are THC and CBD. Both THC and CBD have their benefits. THC is found in very small concentrations in the plant cannabis, such as 0.3% only, but CBD is present in solid form in the plant cannabis. THC is a psychoactive component which means it has the potential to keep you high or provide you with high sensation. In comparison, CBD in solid form does not act as a psychoactive component.

Chemical structure the molecular structure of CBD and THC is somewhat the same. Because both have the same number of carbon atoms which is 21, and hydrogen atoms which are 31 atoms each. However, both have 2 oxygen atoms in their chemical structure.  Both have the potential to interact with the endocannbidiol system of the body. It has two receptors with which both react, and it results in releasing neurotransmitters in the body. The neurotransmitters help to send messages to the brain and the body and thus regulating pain and stress levels.

The chemical structure of both THHC and CBD are the same, but the only difference reported is the arrangement of the atoms.

As stated above, THC is the most psychoactive component so far. Though CBD is also psychoactive, it still leaves the margin. THC has the potential to interact with both receptors, such as receptor 1 and when it interacts with the first receptor, it gives you a great feeling of euphoria. Whereas CBD interacts with both 1 and two receptors, but it binds weakly and at a much slower rate. It allows THC to first interact with 1 receptor, thereby reducing the sensation of euphoria or high sensation in the body. And then CBD interacts.

Every state has its rules and regulations that are to be followed before buying CBD or THC. Both have their benefits, but certain limitations are to be followed. Both are to be used with great precision. No matter how much beneficial it is, some limits are to be followed. In the United States, there are some countries that have legally made CBD to be used for medical or recreational purposes. But for thc new rules are still to be implemented. CBD, as compare to THC is still considered safe to be used.

We have mentioned many a time that THC is psychoactive and can cause an excessive high sensation in the body, but with CBD, things are different; CBD is approved by FDA, and the first medication, Epidoliex, was put forward, and this medicine has a small fraction of CBD in it that allows treating epilepsy. This medicine is only approved in the USA but not in other states because countries have their rules and regulations and require a lot of evaluation before implementing it. CBD is used for amusing and therapeutic purposes in some parts of the USA. But things are tight for THC.

CBD is considered safe and can be taken in large amounts, but with THC, things are different. If we take medications without a doctors prescription, then side effects are pretty common as well. The common side effects reported by THC intake are

CBD can also cause some side effects, so some reported so far are

Yes, there is a great possibility that some of the sensitive drug-testing techniques can lead to being reported and noticed by the users who are checking the tests but not every test may respond to CBD and THC. Therefore there are 50-50 chances of detecting both components in the drug test you are going through.

THC is though not feasible or recommended to be taken daily, but it has some benefits as it can help to treat insomnia and anxiety as well, but there is no clinical evidence on humans supporting it. So it has to go a great way as well

What is the difference between full spectrum CBD and Isolat?

HOW LONG DOES CBD STAY IN YOUR SYSTEM?