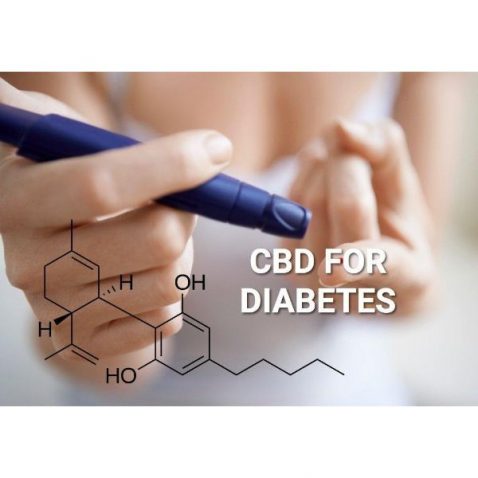 What Research Says About CBD Oil and Diabetes?

The word “diabetes” derives from the Greek word “siphon,” meaning “to pass through.” This is characteristic of diabetes that can be attributed to a complete or partial lack of insulin in the body, preventing glucose from being absorbed by a person’s tissues.

Cannabis has long been a topic in the medical research world. The plant’s pharmacological properties have yielded some interesting findings: for example, it has been found to be an effective immunosuppressant. More recently, Cannabis has started to enter the conversation due to its broad pharmacological spectrum of action, and more specifically, its potential as a viable immunosuppressant.

Type 2 diabetes brings a lot of long-term effects, such as proliferative retinopathy, nephropathy, cardiovascular disease (CVD), impaired healing and more. Maintaining blood glucose levels is the best way to prevent these. However, it’s important for Type 2 diabetics to be aware that while they maintain a healthy lifestyle, they need to exercise caution in the future because of the potential complications and side effects that might arise.

The non-psychoactive component of cannabis, CBD, has been shown to be useful in treating the complications of diabetes in animal models. CBD has become increasingly popular because it provides health benefits and doesn’t have the ‘high feeling’ that THC does.

What is diabetes and what causes it?

Type 1 diabetes is an autoimmune disease that can lead to an absolute deficiency of insulin. Insulin is the hormone that unlocks the cells and allows glucose to enter. Without insulin, there is nothing to control the uptake and storage of glucose in your body. This is the most essential energy molecule, yet without insulin, we have no way to process it.

This type of diabetes is associated with molecular markers, such as auto-antibodies to insulin and β-cells in the pancreas. Type 1 diabetes is most likely caused by a genetic predisposition and can typically be seen in childhood, adolescence, or adulthood.

If you are diagnosed with hyperglycemia, it is most likely because your blood sugar is elevated after 8 hours without eating. A fasted plasma glucose of 126 mg/dl (7.0 mmol/L) or a casual plasma glucose of 200 mg/dl (11.1 mmol/L) is often the reason for a diagnosis of diabetes mellitus.

High blood sugar is a very serious health challenge diagnosed by excessive thirst, excessive urination, and heavy fatigue. These symptoms are usually accompanied by diabetic ketoacidosis (DKA), which can cause hospitalization and even death in severe cases.

Type 2 diabetes is the result of a combination of resistance to insulin and an inadequate insulin response. This response is a combination of an overweight or obese person, and a person with a fat distribution primarily in their stomach and upper body. It has been estimated that 35.2 million people have diabetes in the United States, with 90-95% of all diabetes cases being type .

Type 2 diabetics may have the disease for a long period of time before symptoms arise. They may not experience hyperglycemia or ketoacidosis. This is because their insulin levels seem normal or even elevated, but it is not enough to compensate for insulin resistance. 1Mathews, A. (2016). The onset and development of type 2 diabetes mellitus: what we know and where we go from here. Diabetes management, 83(4), 566-576

Type 2 diabetes is a disorder that body does not produce insulin on its own, necessitating the ingestion of exogenous insulin to survive. Under treatment, however, a diet and exercise regimen is essential for Type 2 diabetics. Type 2 diabetes is linked to a wide array of other disorders, including hypertension, hyperlipidemia, and low HDL-cholesterol.

Diabetes is a long-lasting metabolic illness that causes complications. One of the most common problems for those with diabetes is nephropathy. It can happen at any time and can be difficult to treat. Other complications include cardiovascular disease (CVD), retinopathy, and impaired healing.

CBD (cannabidiol) has a rich history of use in China and India as a therapeutic agent for multiple diseases. Evidence of the effectiveness of CBD has been published7-12 with research suggesting immunomodulation and modulation of neuronal and cardiovascular function. Today we will be looking at the science of CBD and its potential to help with diabetes complications.

There are two new pharmaceuticals that have been developed that are a purified plant form of cannabinoids. One is FDA-approved, but the other is still pending. Sativex® is a new drug for in patients with seizures and Huntington’s disease, and the other name is Epidiolex®, which is for patients with Lennox-Gastaut Syndrome (LGS).

Epidiolex® is a high-quality CBD product. It is just one of many quality cannabis products on the market today. States and jurisdictions have different laws governing who can buy and use cannabis. In states where cannabis is legal, there are many types of THC marijuana products available to buy. CBD, on the other hand, is not psychoactive or high in toxicity.

Cannabidiol is a natural, non-addictive, and legal supplement that can be used as an alternative medicine. The popularity of CBD has risen because of how its high CBD content can be derived from certain plants. Cannabidiol is usually an all-natural supplement to buy.

A tincture is a type of CBD. It’s made by dissolving CBD in alcohol and then adding it to an oil, like MCT oil. CBD is fat-soluble, so the product will be oily. Tinctures are most effective when applied to the mouth under the tongue or sprayed orally.

When CBD is consumed orally, it has a bioavailability rate of only 6%. This means the other 94% of the dose will be metabolized and pass through the digestive system. For this reason, it is important to find a high concentration CBD formulation in edibles or capsules.

Cannabinoids, like CBD and THC, work by mimicking our natural endocannabinoids. These molecules bind to receptors and activate the endocannabinoid system. For example, CBD interacts with CB1 and CB2 receptors, which is how it helps combat anxiety and pain.

The endocannabinoid system is activated by excitation, which then stimulates the release of endocannabinoids that then ‘pump the breaks’ on further synapses. The point of contention for many researchers has been CBD’s activation of cannabinoid receptors (CBs) and what it does to activate them.

CBD doesn’t bind with any of the cannabinoid receptors. It’s true that CBD interacts with many receptors and has a wide range of effects. One example is its interaction with adenosine A2A receptors, which may help to control the function of pain and inflammation responses. And for those who are curious, CBD doesn’t have any side effects on the liver.

An agonist is something that binds to a receptor and elicits the effect. When it comes to cannabinoids, AEA is a full agonist of CB1 receptor. An antagonist is something that blocks the effects of the agonist. CBD was formerly thought of as an antagonist before, but more recent research shows that it doesn’t even bind the active site on the receptor.

These cytokines, such as TNFα and IL-6, are said to cause damage to the body. Reactive oxygen species, or free radicals, are also released and can cause tissue to become oxidized. THC is a partial agonist for CB1 receptors which is mainly found in the central nervous system. However, CBD has a higher affinity for CB2 receptors found on cells of the immune system, such as B lymphocytes.

Inflammation is a response to cellular invasion, wherein cells can produce inflammatory products: prostaglandin (PGE2) and cytokines. CBD reduces the production of these inflammatory cells, as well as decreasing the activity of the enzymes involved in creating inflammatory substances. This may lead to less pain and swelling. A study in which CBD was given orally in doses of 5-40mg/kg once daily for 3 days following carrageenan injection found that CBD reduced the pain of inflammation.

CBD had anti-inflammatory effects in a mouse model of acute lung injury. CBD reduced the number of white blood cells that migrated to the lungs and reduced inflammation. The beneficial effects of CBD were mediated by the activation of A2A receptors. Once more, CBD proved to be valuable in a low concentration to reduce Il-6 in a mouse stroke model.

Some studies have found that CBD can help to stop Type 1 diabetes from coming into effect. It has been found that the main cause of Type 1 diabetes is free radicals and oxidant species, which are reduced by CBD. In addition, inflammatory cytokines have been shown to reduce beta-cell destruction.

Two recent studies show the potential of CBD to help diabetic mice. The first study used a T1DM mouse model and found that only 32% of the treated mice were diagnosed with diabetes, while 100% of the control group were diagnosed. The second study also found that CBD treatment suppressed production of three Th1-associated cytokines (IL-12, IFN-γ, and TNFα) and instead, promoted production of Th2-associated cytokines.

Atherosclerosis, or hardening of the blood vessels, is a common complication of diabetes. It can lead to diabetic retinopathy, which affects nearly 75% of diabetic patients 15 years after diagnosis and is because of an increase in blood viscosity from chronic hyperglycemia. The tiny, thin capillaries of the eye are at risk for damage in both Type I Diabetes Mellitus and Type II Diabetes Mellitus.

Diabetics are at risk for damage to their retinas and retina microglia cells. This condition is caused by the accumulation of fluid due to capillary hyperpermeability, and may lead to blindness in some cases. Studies have shown that CBD, an anti-inflammatory, can reduce the inflammatory response from immune system stimulation by LPS (LPS stimulates the immune system). CBD also has proven to be an effective treatment for high-glucose damage to the coronary endothelium.

If you have diabetes, chances are you’re dealing with edema in your feet. Edema in the extremities is swelling in your ankles, legs, and feet. For people with diabetes, this can be accompanied by diabetic foot ulcers which occur in 15% of people with diabetes and precede 84% of diabetic lower leg amputations. CBD extracts may be a great way to deal with chronic pain, which is intractable.

The underlying factors behind diabetic cardiomyopathy are a thickening of the heart’s walls, a higher level of muscle proteins and the development of fibrosis. Diabetes also causes an increase in pro-inflammatory cytokines and oxidative stress.

CBD boosts the heart! CBD may help with heart disease. In a mice study, CBD was seen to decrease myocardial dysfunction, cardiac fibrosis, oxidative and nitrative stress, inflammation, cell death, and interrelated signaling pathways. This can be seen as an acute and prolonged treatment for cardiovascular disease.

With more countries legalizing cannabis for recreation and medicinal use, more research is being done. The negative effects of diabetes mellitus can be frightening, but CBD may have the ability to relieve some of the physical and biochemical stress, leading to a better quality of life. Cannabis contains over 140 unique compounds including THCV, CBC, CBN, and CBG.

CBD extracts contain a variety of terpenoids and phenolic compounds. These substances have different effects on the body, but they all work as part of the same system. The future will likely see the emergence of CBD-dominant plant extracts that also contain these minor cannabinoids and terpenes.

What is Decarboxylated CBD? 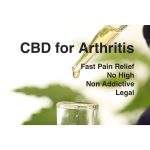 How To Use CBD for Arthritis